Earlier today I read a post on The Verge about a “tiny, Florida-based phone maker that thinks it can beat Samsung”. I was interested, so I did some research on the company, Blu Products. I wanted to see if they really have what it takes to beat Samsung. Fortunately for Samsung, it appears they do. Yes, fortunately.

Last week, Samsung got a little weird on us. Not quite Qualcomm weird, but certainly weird. However, tonight I came across something that makes everything before it seem so acceptable, some might say admirable.

It is my pleasure(?) to introduce Blu Products’ understanding of marketing. In the following video, you will witness what I can only describe as prostitution.

The video speaks for itself.

Between this, Apple’s “Why iPhone” page, last weeks Samsung event, the fake Nokia Lumia 920 photos, the Qualcomm pageantry and this horrible music video featuring Blackberry executives there is strong empirical evidence to suggest that the classiness of a company’s marketing is an accurate barometer of fiscal success within the mobile handset industry.

I can’t stop laughing, I don’t even know why.

In case it wasn’t obvious, Blu Products used an iPhone in that advert. 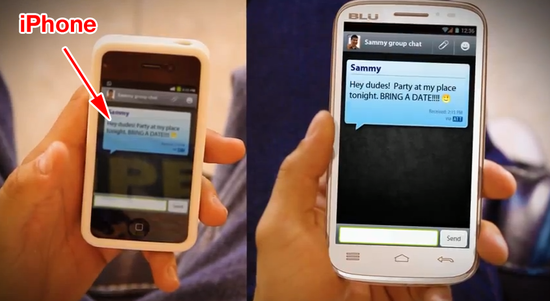 Permanent URLs are a powerful idea, and it’s a feature of using Posthaven we think you should get even if you stop paying. We’ll keep the site online, but you won’t be able to edit content or add to it. This doesn’t make much sense to... Continue →